Stronger than expected start to Q3 US reported earnings

Local and global equity markets lifted this week supported by better investor confidence and mixed US inflation and labour market data which may have reduced some pressure on the US central bank’s next move. Read more..

Markets hold their own in light of plenty of news flow

Local and global equity markets looked set to finish the week higher in what has been a topsy-turvy week for investor sentiment. Read more..

Historically, western media has done a rather poor job at covering issues in China, and 2021 is no different. That has usually meant media/investor overreaction when not required and media/investor underreaction when required. Covering China is no easy feat in that communism can be hard for westerners to get their head around, and even once you do, it’s not like China is following any sort of traditional communist playbook. What counts when really understanding China issues is history, experience, and a reasonable level of pragmatism.

The Chinese economy has been growing strongly for many decades as we can very clearly attest here in Australia given the benefits we have derived from that growth. However, their economic growth path had began to slow over the last 10 years or so, albeit at a still very healthy 6% annual economic growth, as the Chinese government pushed through significant reforms to transition the economy from cheap manufacturing and fixed asset investment to areas more synonymous with developed countries like consumption, services, IT/technology, and higher quality (and cost) manufacturing, whilst being more outwardly focused in terms of foreign policy.

The political context is also important in that since Mao, China has largely been ruled in a committee-like structure with a President, Prime Minister, and very important Politburo (standing committee of the Chinese communist party), where issues were raised, discussed, debated, and decided on in a consultative manner. Think of it as the checks and balances western democracies have elements of. In 2018, that all changed with current President Xi Jinping abolishing term limits on presidents and effectively writing himself (by name) into Chinese principles and hence confirming his future power for years to come. As best described to us more recently, that roughly means that Xi hands down the edicts for the Politburo to interpret, implement, and ensure enforcement. That has likely made it harder for westerners to understand the current direction of China and also more concerned given the one-person rule approach.

The Chinese economy was the first to be hit by Covid-19 but was also the first to come out of that malaise, seeing a strong recovery through most of 2020. At the same time, the Chinese government took it upon themselves to strongly embark on a program of reform at the corporate level, first attacking stock IPOs in terms of their disclosure, their US listings, and the potential power (both monopolistic and leadership) these companies may wield, and using broader societal benefits as a justification to clamp down on sectors including video gaming (physical and mental health), for-profit education (cost), steel production (environmental), property development (housing bubble), and broader corporate monopoly behaviour which is hurting small-to-medium sized businesses. 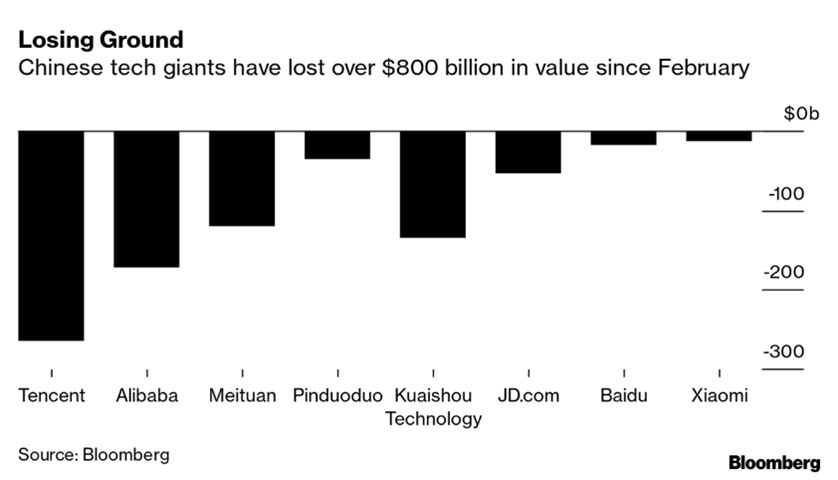 None of this should be seen as a surprise given communist rule and given what we’ve witnessed from China over many years. What has caught both the media and the market by surprise is the methodical way in which they’ve gone from sector to sector (versus a more ad-hoc / disjointed approach historically) and also the prevailing belief (rightly or wrongly) that China had been attempting to move itself to a more western-style approach to their financial markets and their economy, which may now be on the reverse. Too much change too quickly increases the chances of a policy misstep. Given the political context above (ie. the move to one-person rule), none of this should be terribly surprising, but it may be hard to get your head around in the short term.

The number of reforms being pushed through has resulted in weaker than expected economic data of late which has been particularly evident across retail sales, industrial production, manufacturing, and property sales/prices, bringing into question China’s economic growth path ahead and the potential need government/central bank stimulus to right the course.

The issue at hand - Evergrande

China is the world’s 2nd biggest economy. The property sector in China makes up around 25-30% of the economy. Evergrande is China’s 2nd biggest property developer and the world’s most indebted ($419 billion of debt) and is now in severe financial distress and at risk of collapse, a direct result of the Chinese government’s effort to compel property developers to deleverage. Fears are that the collapse may have broader implications, both directly and indirectly, for the Chinese property market, the Chinese economy, the world economy, and markets more broadly.

This has spooked markets over the last few weeks with references made to another Asian financial crisis brewing or even another Bear Stearns / Lehman Bros type event (ie. GFC). Scary news sells, and the scarier the better as far as the media are concerned. We humans lap it up as it appeals to our emotions, so we’re not clear of blame either.

Evergrande is unlikely to be only the Chinese property developer caught in the government’s crosshairs.

Why we don’t think it’s a cause for concern

Firstly, most of Evergrande’s debts are domestically owed/held, with more than 50% in accounts payable and acceptance bills, and roughly another 14% which are “wealth management products” sold to retail investors (Chinese households).

Secondly, this is property developer, not a bank. Whilst local and offshore banks may have lent to Evergrande, most of the issues will be ring-fenced within China and banking systems are significantly more robust and better capitalised than they were pre-GFC. There’s also more awareness about how inter-connected finance/banking channels may be. In saying that, debt, and equity holders in Evergrande will be made to bear the brunt of the pain, whilst Chinese households are bailed out.

Thirdly, China has a social contract with its people and the Chinese authorities cannot afford to allow the property group to fail abruptly (ie. will likely fail or re-structure in a controlled manner). The question now is who bails the company out (ie. the central government or local companies/authorities) and what does the bail out look like. The Chinese banking system should be able to handle any sort of fall out and the Chinese central bank stands ready to inject liquidity if required.

China’s broader slowdown will impact their trading partners (eg. Australia and iron ore) in the shorter term, but we’re likely to see fiscal and monetary support from the Chinese authorities if growth slows too quickly.

How does it impact portfolios?

We have been closely watching the events discussed above unfold in China over the last 12 or so months. None of what we’ve seen is out of the realms of expectations versus China’s history, their style of communism, and the newfound and likely enduring power of Xi.

That doesn’t mean we’re flippant or not concerned regarding these events. It just means we look at them through a somewhat different lens. Investing in China, and broader Asian / emerging markets, comes with the associated risks. Whilst some of those risks are unique to China, many aren’t unique to the risks we see in markets all around the world, they’re just more front and centre in China.

We’ve read widely and spoken to a variety of people with experience and expertise in and around China. Nothing we’ve seen at this point is a major cause for concern when it comes to portfolio exposures and portfolio positioning. The upside case for China and broader Asian / emerging markets remains (if anything, it looks more attractive now from a valuation perspective with a long-term view in mind) and continues to come with the associated risks.

We continue to prefer an active approach to any Asian / emerging market exposure in portfolios. If anything, the case for an active approach to these markets is now stronger than ever. We remain comfortable with the approach being taken by the active managers in this space we hold in the highest regard, who continue to be selective and pragmatic in their approach, some of which includes:

If you’d like to discuss any of the points raised, please do not hesitate to contact your adviser.